Coach and mother to tennis stars, Andy and Jamie, Judy Murray will be hoping to take game, set, and match as she jostles with former England cricket captain and psychoanalyst, Mike Brearley on the 2017 William Hill Sports Book of the Year Award longlist, announced today (Thursday 21 September 2017). The ‘Bookie Prize’ – now in its 29th year – is sports-writing’s most valuable and prestigious prize.

Penned with journalist Alexandra Heminsley, Murray’s autobiography Knowing the Score: My family and Our Tennis Story is one of five books on the longlist authored by women, with a total of nine female authors and co-authors – by far the highest number to have been nominated in the Award’s history. They include: Four Mums in a Boat, the story of four working mums from Yorkshire – Helen Butters, Niki Doeg, Frances Davies and Janette Benaddi – who took on the Atlantic to break a world record, rowing 3,000 miles for charity and in turn captivating the nation; a homage to the ‘swimming suffragettes’ who paved the way for the modern female swimmer in Swell: A Waterbiography by Jenny Landreth; Centaur, the story of leading jockey Declan Murphy and his miraculous recovery from the fall that should have killed him, brought to life by writer Ami Rao; and The Talent Lab:The secrets of creating and sustaining success, by award-winning sports journalist Owen Slot, in collaboration with the record-breaking performance directors of Team GB Chelsea Warr and Simon Timson, reveals the secrets to achieving success.

Stints at Her Majesty’s pleasure are documented in two of the longlisted titles: a dramatic story of sporting salvation is relayed by author Mark Turley with former gang member and one of Britain’s Most Wanted criminals, John McAvoy, in Redemption: From Iron Bars to Iron Man – whilst serving a life sentence for armed robbery in Belmarsh high security unit, McAvoy discovered a talent for endurance athletics, which he harnessed to become a world record-breaker and one of the UK’s leading Iron Man competitors; and the highs and lows of the life of professional gambler and one of the industry’s most bombastic characters, Harry Findlay – including a one year prison stint aged 21 – as detailed by Findlay with author Neil Harman in Gambling for Life.

Both cricket and football feature highly on this year’s longlist, with three books apiece in the running. Kicking-off the footballing titles is The Greatest Comeback: From Genocide to Football Glory by journalist David Bolchover, which gives an account of the life of holocaust survivor and one of the original superstar football coaches, Béla Guttmann – from evading the Nazis to twice raising the European Cup at the helm of Bentica in the early 1960s; in Quiet Genius: Bob Paisley, British Football’s Greatest Manager, journalist Ian Herbert celebrates the understated personality and talent of legendary Liverpool F.C. manager, Bob Paisley; and completing the trio is a crowd-funded collection of essays edited by Neville Gabie, Alan Ward and Jason Wood, Breaking Ground: Art, Archaeology and Mythology, which uncovers and reveres the archaeology, art and mythology of Bradford Park Avenue football club.

Opening the batting for cricket-related books is aforementioned former England cricketer Mike Brearley, as he combines his sporting and psychoanalytical expertise in On Form to investigate what it is that makes humans perform at their very best; next up is Feeling is the Thing that Happens in 1000th of a Second: A Season of Cricket Photographer Patrick Eager, Australian writer Christian Ryan’s book centring on arguably the most significant figure in cricket photography, Patrick Eagar; and lastly the life and times of legendary West Indies cricketer, Learie Constantine are explored by Harry Pearson, from Trinidad to England’s North, in Connie: The Marvellous Life of Learie Constantine.

Rounding up the longlist are titles celebrating iconic figures and teams from boxing, cycling and rugby history: in Ali: A Life US author and journalist Jonathan Eig paints a portrait of the world’s ‘greatest’ boxer Muhammad Ali, informed by over 500 interviews and FBI documents; editor of cycling magazine Rouleur, Andy McGrath uncovers the man behind the myth of champion cyclist Tom Simpson in Tom Simpson: Bird on the Wire; and the excitement and euphoria of the epic 1971 British & Irish Lion’s tour of New Zealand are captured by author and editor of Arena Sport, Peter Burns with BBC broadcaster and sports-writer, Tom English in When Lions Roared, The Lions, the All Blacks & the Legendary Tour of 1971.

The longlist in full (alphabetically by author’s surname):

Chairman of Judges and co-founder of the Award, Graham Sharpe, said:

“Judging the Award is a sport in itself. This year’s submissions were of an extremely high standard – excellent for the health of sports-writing, not necessarily so good for those of us embarking on the challenge of seriously considering, debating and ultimately deciding on which worthy titles will make our starting line-up. In any competition decided by opinions, there will be those who feel dismayed and disappointed. I have now been through this process 29 times. It never gets any easier or more enjoyable, I’m afraid! Congratulations to those who made the cut, commiserations to those who missed it.”

The William Hill Sports Book of the Year Award is the world’s longest established and most valuable literary sports-writing prize. As well as a £29,000 cash prize, this year’s winning author will receive a free £2,500 William Hill bet, and a day at the races.

The judging panel for this year’s Award consists of: journalist and broadcaster Mark Lawson; retired professional footballer and former chairman of the Professional Footballer’s Association, Clarke Carlisle; broadcaster and writer John Inverdale; broadcaster Danny Kelly; award-winning journalist Hugh McIlvanney; and The Times columnist and author, Alyson Rudd. Chair of Judges is Graham Sharpe, co-creator of the Award alongside John Gaustad, founder of the Sportspages bookshop, who retired following the 2015 Award and passed away last year. 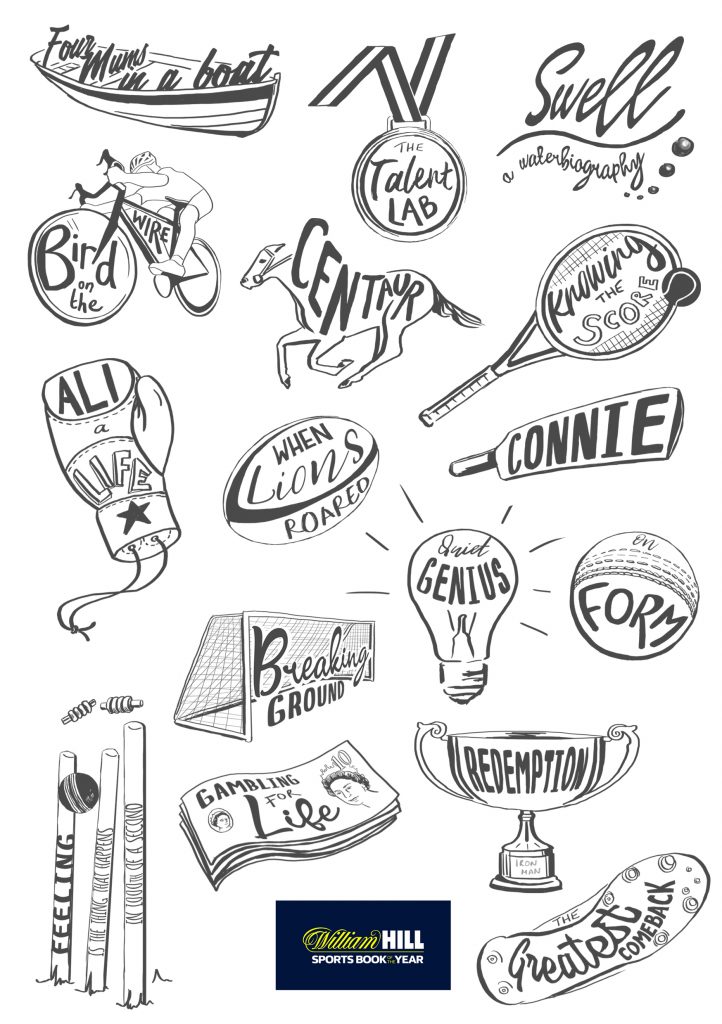