Yesterday, Collins  announced the results of research into how much time and effort parents invest in their children’s school work. The survey, released as families prepare to go back to school this autumn, revealed that three quarters of British parents feel ‘under pressure’ to make sure their child does well with school work and exams.

A study of 1,000 parents and 1,000 children in school years 1-11 found that over a third of parents said that their youngsters’ success is important to them because they want them to do better at school than they did. The research also found almost one quarter of households feel ‘strained’ due to the demands of homework, with one quarter saying it impacts on their quality family time together.

The final year of primary school was pinpointed as the most pressured time for both parents and children, with the leap to secondary school having an impact on family life.

Over half of respondents said that a child’s homework is regularly the centre of family conversations. 62% of mums and dads also admitted that they put their child’s work before their own work.

Maths required the most time and attention, with 45 per cent of parents admitting they spend the longest time helping their children with this subject. English comes in second place at 27%.

Almost half (47 per cent) of primary school children would like their parent’s help with homework, as would 44 per cent of secondary school students.

Seven in 10 students, both primary (71 per cent) and secondary (73 per cent) agree their parents’ support helps them do better at school and over one third – 35 per cent of primary school children and 37 per cent of secondary – would struggle on their own.

The research was commissioned by Collins, leading publisher of school, homework and revision books. Colin Hughes, Managing Director of Collins said: “We know that parents care deeply about how their children are faring at school, which makes them feel under pressure to ensure their children thrive. It’s important to note, though, that even though homework can create strain at home, most children want their parents’ help. As families prepare for the new school year, we can provide support and encouragement both to parents and school children that will help take off some of the pressure.”

According to 42% of parents, their main concern when it comes to their child’s education, is their confidence being affected if they don’t do well, whilst over two thirds fear their child may not get the grades they want or need.

A further 40% of parents said they worry their child’s grades will affect what people think of their parenting skills and four in five said one of the proudest moments of being a parent is seeing their child ‘thrive’ in education.

Three in 10 parents admitted to comparing their child’s success to others, and believe social media adds to the pressure they feel. Similarly, over one third believe social media only shows the positives, with 26% of mums and dads saying that other parents shouldn’t post updates on their child’s behalf. In the words of one parent: “I feel it’s unnecessary to brag about how well children do at school as it puts pressure on parents and can make them feel inadequate.”

Colin Hughes added, “As well as working closely with schools, we understand how difficult it can be for a parent navigating the education system. Collins offer a wide range of books that help families find answers to questions about homework and revision quickly and easily. We hope to ease some of the pressures parents feel under at key times during their child’s school journey.” 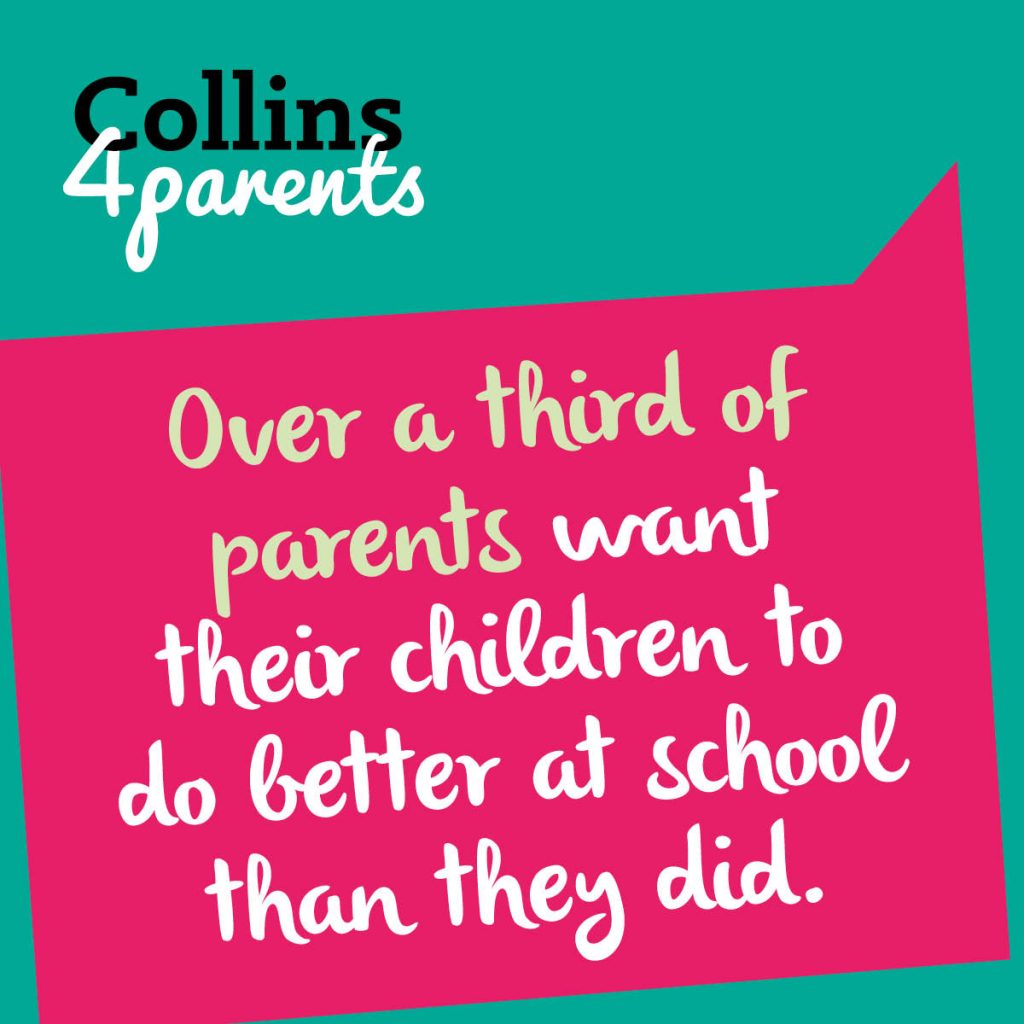