In Invisible Women, Criado Perez brings together for the first time a range of case studies, stories and new research from around the world that highlights the ways women are ‘forgotten’ on a daily basis. From government policy and medical research to technology, media and workplaces, she exposes to readers the lack of gender-specific data that has unintentionally created a world biased against women.

Criado Perez presents a clear case for policy change by exploring the myriad ways the world is designed for men; from the size of mobile phones to women being more likely to be misdiagnosed following a heart attack. Invisible Women is a rallying cry to close this gap by paying attention to the whole population, not just half, and ensure that our world is constructed for everybody.

Criado Perez becomes the fifth woman to scoop the Prize in as many years, following last year’s winner Sarah-Jayne Blakemore (Inventing Ourselves, 2018), Cordelia Fine (Testosterone Rex, 2017), Andrea Wulf (The Invention of Nature, 2016) and Gaia Vince (Adventures in the Anthropocene, 2015). The panel of judges praised the 35-year-old writer for challenging their worldview and perceptions by revealing the systemic discrimination caused by a data gap.

Chair of this year’s judging panel, Professor Sir Nigel Shadbolt FRS, Principal and Professorial Research Fellow in Computer Science at Jesus College, University of Oxford, said: “Invisible Women is a brilliant exposé of how the world is designed around the default male. Caroline Criado Perez writes with energy and style, every page full of facts and data that support her fundamental contention that in a world built for and by men gender data gaps, biases and blind spots are everywhere. As an AI researcher and data scientist, it makes me look at my field afresh. Read it and be prepared to think again.”

Fellow judge and bestselling author Dorothy Koomson added: “Invisible Women shows quite clearly: modern-day life has been built for one particular type of person and if you do not fit that type, the world doesn’t work properly for you. From tech that doesn’t recognise feminine pitched voices to health symptoms that are dismissed and often prove to be fatal; from work situations that are set up to prevent women being promoted to public transport networks that make life harder for the people who use them most, we have a real world problem that needs to be talked about. And changed. This important and vital book is only the beginning of the conversations we need to be having about how to make sure modern life works properly for everyone, no matter who they are. It’s definitely a worthy winner.”

Professor Brian Cox OBE FRS, The Royal Society’s Professor for Public Engagement in Science, hosted the awards ceremony at The Royal Society at which Criado Perez’s book was announced winner. He commented: “We look to science to provide objectivity and curb our human biases. To be reminded then – as Caroline’s book so forcefully does – that our modern society is built upon a foundation of incomplete and often biased data, is cause for real reflection, not just for readers of popular science writing, but for the science community too. This book proves why contemporary science writing is vital and relevant and has an important role to play in challenging us to do better.”

Caroline Criado Perez received a cheque for £25,000 at the ceremony and the five shortlisted authors were each awarded £2,500. Invisible Women is Criado Perez’s second book, following the well-received Do it like a Woman.

Founded in 1988, the Prize is the only major international award that celebrates popular science writing for a non-specialist audience. Over three decades, it has championed writers such as Stephen Hawking, Jared Diamond, Stephen Jay Gould and Brian Greene and last year’s winner Sarah-Jayne Blakemore. 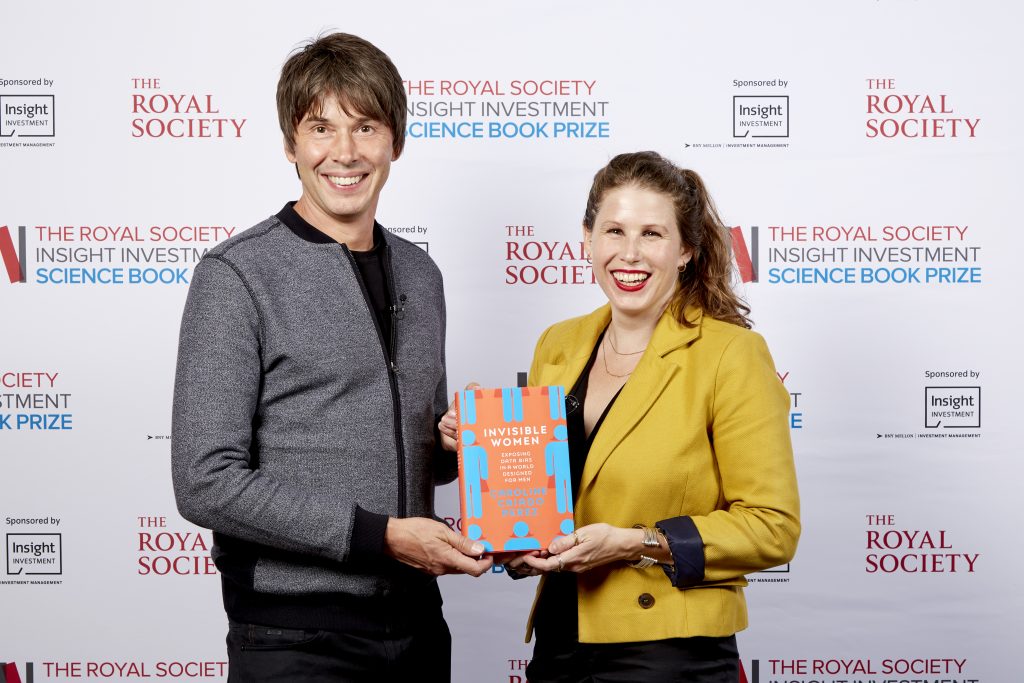