Her Royal Highness The Duchess of Cornwall, Vice-Patron of the Royal Commonwealth Society, has today launched The Queen’s Commonwealth Essay Competition 2020 at Tūranga library in Christchurch, New Zealand.

The 2020 theme, ‘Climate Action in the Commonwealth’, encourages young writers from across the globe to explore the many facets of this critical issue, which will dramatically shape the future of the Commonwealth’s 1.6 billion citizens under the age of 30.

The selection of this environmental theme is particularly welcomed by the Competition’s new principal sponsor, Moomin Characters, which has a long history of charitable work, particularly championing causes that align with the values of friendship, tolerance, open-mindedness, respect for nature and the power of storytelling. The Moomins, created by the Finnish artist Tove Jansson, are a family of friendly, round trolls who live in Moominvalley with their diverse group of friends and acquaintances. Featured as a comic strip in 1954 in the world’s largest newspaper at the time – London’s The Evening News – the Moomins are much loved characters across the Commonwealth and beyond.

The Queen’s Commonwealth Essay Competition aims to challenge young people’s thinking and the means by which they can express their views, using creative forms of writing such as essays, poems, stories or scripts. Since 2010, it has received nearly 100,000 entries, from hundreds of schools across almost every Commonwealth country. Entries are judged by 150 pan-Commonwealth volunteers. The winners are selected by an expert panel, including poets, publishers, scriptwriters and journalists.

The Competition has been run by the Royal Commonwealth Society since 1883, and culminates with winners and runners-up traveling to London for a week-long series of educational and cultural events, typically including an Awards Ceremony at Buckingham Palace.

The theme was launched during an assembly of local school children, who had earlier participated in a writing workshop at the library involving local authors, educators and New Zealand’s Poet Laureate, David Eggleton. During the assembly, Her Royal Highness took the opportunity to present a number of certificates to high-level winners from the 2019 Competition.

Sophia Jansson, creative director of Moomin Characters and niece of Tove Jansson, said:
“The power of reading and writing and the importance of working together to protect our planet are both very important to us, and they come together in such a beautiful way in The Queen’s Commonwealth Essay Competition 2020. Each year, the themes of the Competition are around community and collaboration. We’re very proud that in the first year of our sponsorship this is applied to the environment. The passion and intelligence of young people will be crucial in tackling the climate crisis, so we are very excited to see what entrants have to say in response to the topics that have been set for 2020.” 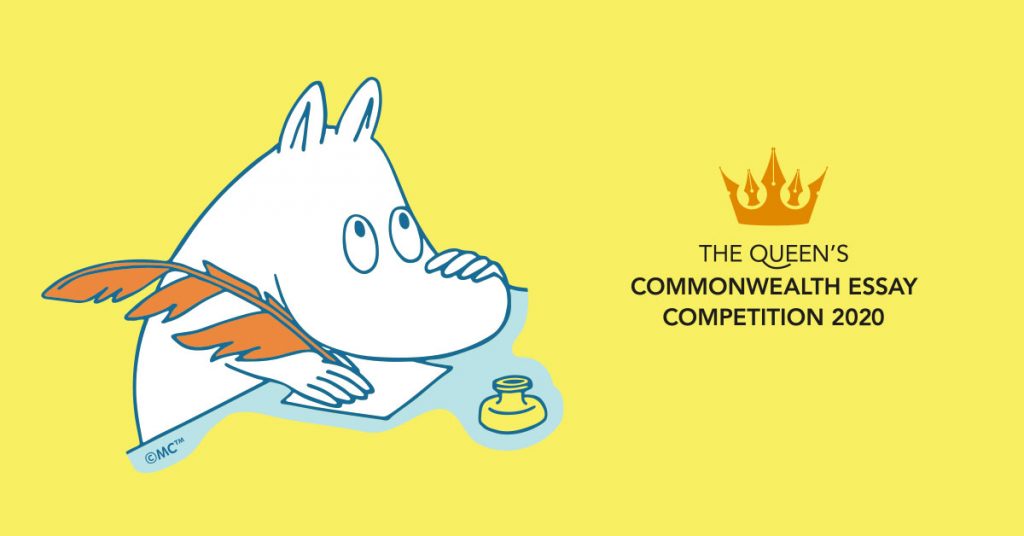