The National Centre for Writing (NCW) has today announced the 10-strong longlist for the £10,000 Desmond Elliott Prize, which will be awarded to the most outstanding first novel of the past 12 months.

The Prize – which is presented in the name of the late, acclaimed literary agent and publisher Desmond Elliott – has longlisted six titles from independent publishers, including Faber, Granta Books, Saraband, Scribe, and Tramp Press. Crowdfunding publisher Unbound makes the longlist for the first time this year, with Crow Court by Andy Charman. The longlist also features strong contenders from Orion, Little Brown, and Penguin Random House imprints Viking and William Heinemann.

The longlist features two works of historical fiction: Andy Charman’s Crow Court, which chronicles the lives of the residents of a Dorset market town in the mid-19th century, and The Manningtree Witches, from poet A. K. Blakemore, which plunges readers into the fever of the English witch trials of the 17th century.

Self-discovery emerges as a theme; in A Ghost in the Throat, a fluid hybrid of essay and autofiction, Doireann Ní Ghríofa tells a tale about finding your voice by freeing another’s. Castles from Cobwebs, by University of York lecturer J.A. Mensah, follows a foundling’s transition from innocence to understanding as she is called to Accra after the sudden death of her biological mother, while Naoise Dolan explores the experience of a young woman leaving her home in Ireland in Exciting Times. Writer and photographer Caleb Azumah Nelson provides an insight into race and masculinity in the love story Open Water, while voice actor and performing member of two theatre companies, Paul Mendez, explores race, class, sexuality, freedom and religion across generations, time and cultures in Rainbow Milk.

How We Are Translated, by bookseller and activist Jessica Gaitán Johannesson, questions identity through an exploration of language. Similarly, The Liar’s Dictionary, by Royal Holloway lecturer Eley Williams, follows a character who aims to discover the secret to living a meaningful life through words.

Rebecca Watson, Assistant Arts Editor at the Financial Times, rounds out the list with little scratch, which tells the story of a day in the life of an unnamed woman processing recent sexual violence.

“We’re delighted to announce a longlist that asks questions of us, with this year’s debut novels exploring themes of self-discovery and language, as well as the nuances of British history and culture through the lens of female and Black experience. We’re looking forward to hearing Lisa, Chitra and Simon’s thoughts on these captivating and thought-provoking debuts.”

This year’s chair of judges, and winner of the 2016 Desmond Elliott Prize, Lisa McInerney, said:

“It is a personal delight to chair the judging panel of the Desmond Elliott Prize five years after Iain Pears, Sam Baker and Katy Guest chose The Glorious Heresies as their winner. So we can keep literature in rude health, a writer who finds success should never pull the ladder up after herself, and this is one way for me to hold that ladder for emerging writers, to pass on the welcome and encouragement and assistance I’ve been so lucky to get from my peers. This is why I was so pleased to hear of the inclusion of a programme of support from the National Centre for Writing — what a positive and important expansion to the prize. I can’t wait to see what’s in store for Chitra, Simon and I.”

The Desmond Elliott Prize is run by the NCW as the flagship in its Early Career Awards portfolio. This also includes the UEA New Forms Award, worth £4,000, for an innovative and daring new voice in fiction and The Laura Kinsella Fellowship, also worth £4,000, which recognises an exceptional writer who has experienced limiting circumstances or whose voice has been underrepresented in mainstream literary fiction. The winners of all three awards will be announced on 1st July, and all will benefit from a tailored programme of support from the National Centre for Writing, supported by Arts Council England. 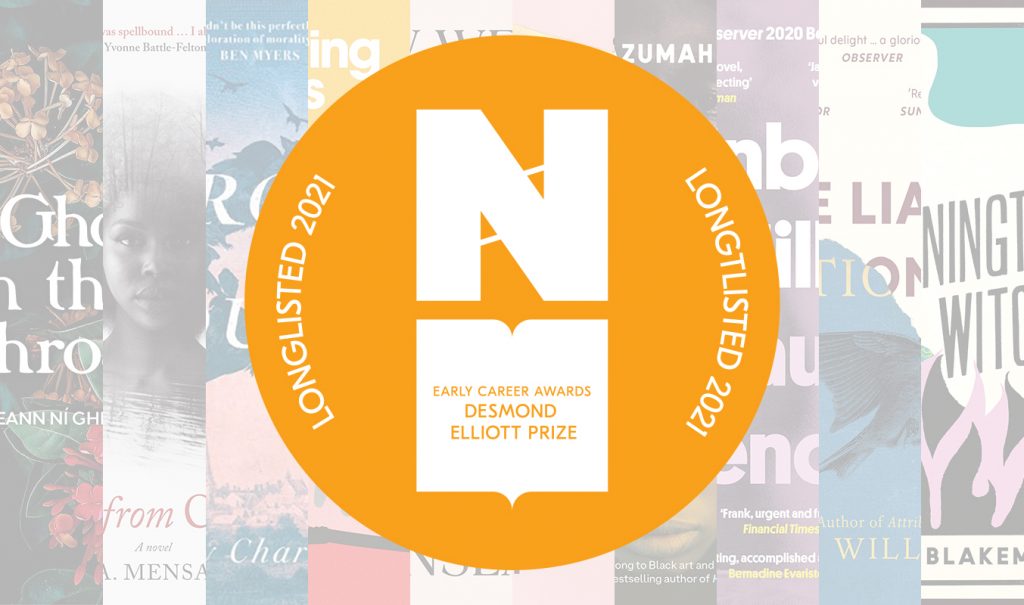