Chosen from a shortlist of six titles celebrating the depth, accessibility and joy of popular science writing, Entangled Life pulls back the curtain on the multifarious and surreal world of fungi − organisms with no brain yet they can solve complex problems and manipulate animal behaviour with remarkable precision.

The existence of fungi predates human history by millions of years, and without them, plants would not have evolved onto land, an essential milestone without which humans would not exist. Fungi have given us bread, alcohol and vital medicines. Primitive communities worshipped mushrooms as others do gods, and their ability to digest plastic and crude oil could make them a potent weapon in the fight against climate change. Despite these critical contributions to life on earth, 90% of species remain undocumented.

Sheldrake reveals the ubiquity of mycelium, or networks of fungal threads, creating symbiotic relationships with plants and linking them together in the so-called ‘Wood Wide Web’. He explores psilocybin, the psychoactive ingredient found in magic mushrooms, resulting in the psychedelic qualities that have sparked curiosity in humans for thousands of years. Lichens, meanwhile, are the only living organism observed to survive in full space conditions.

Through these remarkable stories, Sheldrake sheds light on a neglected and surreal world, showing how fungi could be the key to understanding our planet, and perhaps even saving it.

Merlin Sheldrake received a Ph.D. in Tropical Ecology from Cambridge University for his work on underground fungal networks in tropical forests in Panama, where he was based at the Smithsonian Tropical Research Institute.

The panel of five judges praised Sheldrake for his scientific rigour, illuminating an important but little understood topic and the entertaining nature of his excellent writing.

Chair of the 2021 judging panel, Professor Luke O’Neill FRS, Professor of Biochemistry in the School of Biochemistry and Immunology, Trinity Biomedical Sciences Institute at Trinity College Dublin, Ireland, comments: “Entangled Life is a fantastic account of the world of fungi, which to the uninitiated might seem unpromising as a topic, but which Merlin Sheldrake brings alive in the most vivid of ways.  We learn all kinds of interesting things about fungi, from how they helped plants colonise land (which means without them we wouldn’t be here) to how they form huge networks allowing trees to communicate (in the form of the ‘Wood Wide Web’), to stories of fungus-gathering enthusiasts, how fungi might help save the planet by digesting plastic, and even how they can manipulate our minds.  This is science writing at its very best, which yet again emphasises how the scientific method is so important in our effort to understand the world around us. Entangled Life is an important, scientifically rigorous and most of all entertaining read.”

Brian Cox OBE, FRS, The Royal Society Professor for Public Engagement in Science, added: “At a time when science is front and centre of everyone’s lives, making it accessible and understandable through great writing is more important than ever. The best science writing invites people to explore the world around them and view it in a new way, and Entangled Life is a perfect example. Exploring Nature always delivers insights that are surprising and often resonate way beyond the initial research or subject matter, and Merlin’s wonderfully written book is a perfect example. From antibiotics to parasitic ‘zombie infections’, Entangled Life brings the reader face to face with the beauty and terror of Nature.”

During a ceremony at the Royal Society, which was also streamed via the Royal Society’s YouTube Channel, Sheldrake received a cheque for £25,000 and the five shortlisted authors were each awarded £2,500.

For 33 years, the Prize has promoted the accessibility and joy of popular science writing. It has celebrated some truly game-changing reads: books that offer fresh insights on the things that affect the lives we lead and the decisions we make, from neurodiverse perspectives on everyday living (Explaining Humans by Dr Camilla Pang, 2020) to gender bias (Invisible Women by Caroline Criado Perez, 2019) and the harms humans are wreaking on the planet (Adventures in the Anthropocene by Gaia Vince, 2015, and Six Degrees by Mark Lynas, 2008). 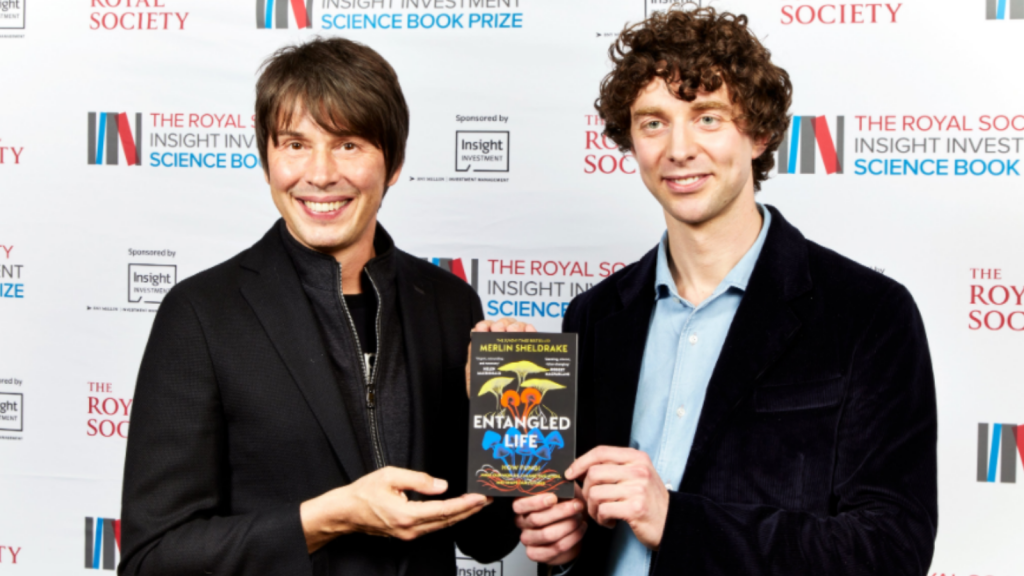