Riot Communications has won a competitive tender from the National Railway Museum, part of the Science Museum Group to deliver a communications campaign for the centenary of one of its star objects, the Flying Scotsman. The objective: to celebrate the importance of the world-famous locomotive in British history whilst also introducing it to new family audiences.

February 2023 will mark 100 years since the celebrity locomotive embarked on its first voyage from the sheds at Doncaster Works. It is named after the daily 10:00am London to Edinburgh rail service and has since become synonymous with the golden-age of rail travel alongside the Trans-Siberian Railway and the Venice-Simplon-Orient-Express.

Riot announces its partnership with the National Railway Museum following two months of intensive preparation for the launch of the centenary campaign at a media event at London King’s Cross station on 14th October. It was Flying Scotsman’s first public appearance following a major mechanical overhaul, which has been completed in recent days.

To drive national interest in the centenary, with a particular focus on engaging family audiences, Riot worked closely with the National Railway Museum (across its events, publishing, brand licensing and retail teams) and a range of stakeholders – including the Science Museum Group, Network Rail, Thames & Hudson, and funders including model railways manufacturer Hornby – to create a launch event that delivered engagement on multiple levels. This included a BBC One – Breakfast broadcast package filmed live from Platform 8 of the station, where Flying Scotsman sat in light steam over the course of the weekend (14-16th October), and a photocall for international picture desks featuring bestselling author Michael Morpurgo – who has written a new children’s book for the centenary – doing a special reading to six-year-old pupils from a local Camden primary school next to the iconic locomotive (pictured). Getty Images’ photograph was featured in the Guardian’s ‘Best photographs of the day‘.

Ahead of the centenary itself in February 2023, families nationwide are invited to discover the magic of Flying Scotsman through Michael Morpurgo’s Flying Scotsman and the Best Birthday Ever and by exploring the calendar of centenary events which went live on Friday 14th October and include the chance to travel behind Flying Scotsman at several locations across the country between October 2022 and November 2023. Further details about the centenary tour can be found in this brilliant Guardian travel feature.

“Flying Scotsman is one of the jewels in the crown of our world-class collection, so we are delighted to have this unique opportunity to celebrate this significant milestone with the nation. The centenary calendar gives us some unique opportunities to engage with a wide range of audiences and reach those who may not ordinarily engage with this iconic locomotive. Working with Riot has been a fantastic experience for all our teams and we know with their expertise and support it will be another memorable year for Flying Scotsman.”

“We jumped at the opportunity to put ourselves forward for this tender, knowing Flying Scotsman’s place in British cultural history and immediately seeing how Riot could bring this icon of engineering and design to a brand-new generation of parents and children. After all, who doesn’t love a steam train? After a two-month deep dive into the world of rail, we were more excited than ever to launch Scotsman’s centenary campaign last week at King’s Cross. Watch this space ahead of the 100th anniversary in February 2023, when Flying Scotsman will travel to Edinburgh Waverley.” 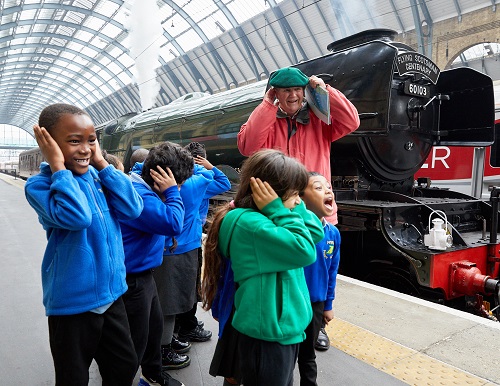