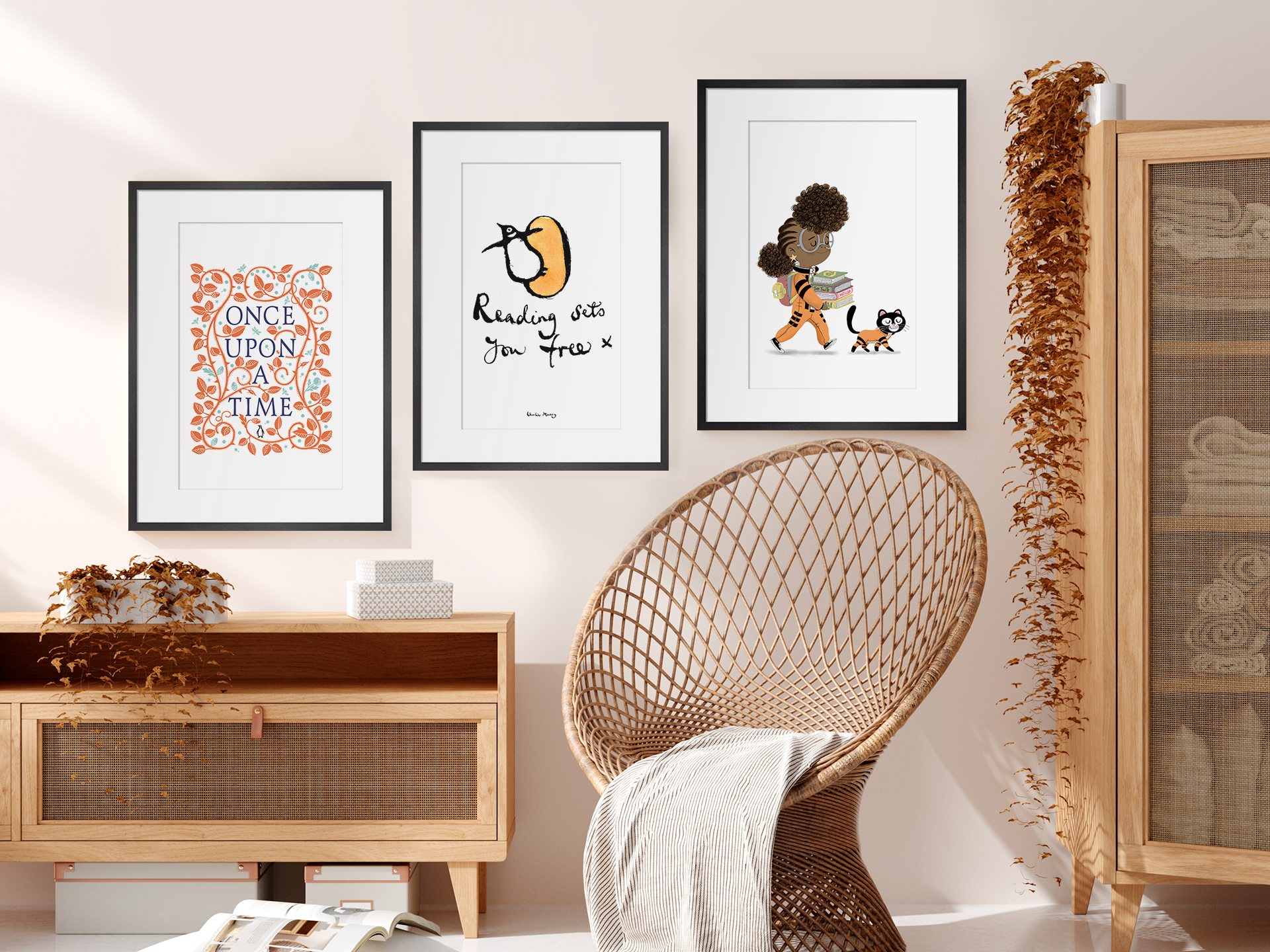 Penguin turns 85 this year and Riot is helping the publisher celebrate by launching a range of fine art prints, with all profits going to the National Literacy Trust.

Specially-commissioned from five leading Penguin artists, illustrators and authors, these beautiful prints – themed around the transformative power of books and reading – are perfect for book lovers and art enthusiasts alike.

Priced £85 each, the framed prints are on sale via the Penguin Shop for a limited period of 85 days. Members of the public will have until Friday 23rd October to purchase a piece of design history.

“From its beginnings in 1935, Penguin has been indelibly associated with design excellence and visual inspiration. We’re proud to work with the very best and most loved artists and illustrators in the world. Marking our 85th anniversary with this project is a fitting nod to that heritage and supports an absolutely vital cause. At Penguin, we make books for everyone, because a book can change anyone. The National Literacy Trust effects tangible and lasting change in peoples’ lives across the country through books too. It’s hugely moving to see how this group of artists has depicted the transformative power of reading in these beautiful artworks. The saying goes that a picture paints a thousand words – these ones will no doubt inspire people to read thousands more!”

“COVID-19 is set to have a disastrous impact on the literacy and life chances of our most disadvantaged children. With widespread school and library closures limiting many children’s access to learning and books, the literacy gap between disadvantaged children and their peers is expected to skyrocket. This could hold them back for the rest of their lives – unless we act now. We have been working tirelessly with Penguin Random House to get books and vital literacy resources into the homes of children who need them most. We are hugely grateful for their ongoing support through this incredible fundraising initiative and to the artists who have contributed their valuable time and talent to capture the transformative power of reading through their creations. Together, we can continue to support the literacy of children who have been most seriously affected by COVID-19 and ensure that no child is left behind.”

Each art print is 30x40cm, printed on matt smooth fine art paper, with a mount and a responsibly sourced solid wood frame with a smooth black satin finish. They are produced by specialist art printers, King & McGaw.

Artist, illustrator and author Charlie Mackesy began his career as a cartoonist for The Spectator, before going on to be book illustrator for Oxford University Press. His award-winning work has featured in books, private collections, and public spaces including hospitals, prisons, churches, university colleges and galleries across London, Edinburgh and New York, and in women’s safe houses around the world. He worked with Richard Curtis on the set of Love Actually to create a set of drawings to be auctioned for Comic Relief, and Nelson Mandela on a lithograph project, The Unity Series. Away from art he’s an ambassador for Mama Buci, a honey social enterprise in Zambia. His internationally bestselling first book, The Boy, The Mole, The Fox and The Horse, was published in October 2019.

Coralie Bickford-Smith is one of the most renowned designers in the publishing industry, especially recognised and celebrated for her illustrated covers of Penguin’s clothbound classics. Her first book, The Fox and the Star, was named Waterstones Book of the Year and as one of Time Out’s 100 Children’s Books of All Time. Her design work has been featured in numerous publications, including the New York Times and the Guardian.

Dapo Adeola is an illustrator and character designer who creates characters and images that challenge gender norms in a fun and upbeat way. He runs illustration and character design workshops in and out of schools, to help highlight the possibilities of a career in illustration to inner-city children. Look Up!, his first collaboration with Nathan Bryon, was shortlisted for the 2019 Waterstones Children’s Book Prize and Sainsbury’s Children’s Book Awards. Clean Up! – the sequel to Bryon and Adeola’s Look Up! –  is published by Puffin on 23rd July 2020.

Jackie Morris is a children’s author and artist. She studied at Hereford College of Arts and at Bath Academy, and went on to illustrate for the New Statesman, Independent and Guardian among many other publications. She has created over 40 books, including beloved classics such as Song of the Golden Hare, Tell Me A Dragon, East of the Sun, West of the Moon and The Wild Swans. She collaborated with Ted Hughes, and her books have sold more than a million copies worldwide. Most recently, The Lost Words – her collaboration with Robert Macfarlane – has become a bestselling, critically acclaimed literary phenomenon. The Lost Spells, a new collaboration with Robert MacFarlane, is published on 1st October 2020.

Vashti Harrison earned her MFA in Film/Video from CalArts and BA from the University of Virginia. Her experimental films and documentaries have shown around the world at film festivals. After a brief stint in television as a production coordinator, she is now a freelance graphic designer and a picture-book illustrator. She is the artist behind a number of Penguin Random House’s inspirational Little Leaders titles, as well as Lupita Nyong’o’s New York Times bestseller, Sulwe.